Whew! Greetings from the North Country and the season of eighteen-hour farm days, friends! Wherever you are, I hope the returning light and the gorgeous green and flowers everywhere are brightening your spirits.

Larch Grove is waking from a long seven-month winter hiatus. We were busy all winter clearing ground for the new farmhouse (all going well, 2017 will be the Year of the Farmhouse!), and winter is the ideal time for chainsawing and moving dead brush, doing rudimentary stumping, and watching where the light falls midwinter to see how it’ll affect a rooftop solar array.

With the ending of the worst night frosts, though, and the start of the long, warm days, the chainsaw got stashed away in the toolshed and we turned our minds to the market garden. The running sap gums up the saw, and with the fire bans in the North Country, we were afraid to continue using a warm engine out in the bush, so the season ended as it always does: in its own time, just as another season begins, and a different sort of work. But stay tuned on the blog this fall for more details and photos as we begin building the road and drop a well for the farmhouse…it’s gonna be an exciting time as we stretch out in a new direction on this home-built farm. Once the big house is ready (well, biggish; at 600 square feet, it’s gonna feel palatial), the cabin will be all set for our guests and visiting artists!

SEED-STARTING. Let’s talk about it, friends! I don’t know about you, but it is my favourite time of the year after a long winter when my mind is feeling a bit withered and colour-starved. Those first seedlings popping their heads up under lights in the grow beds…heaven. 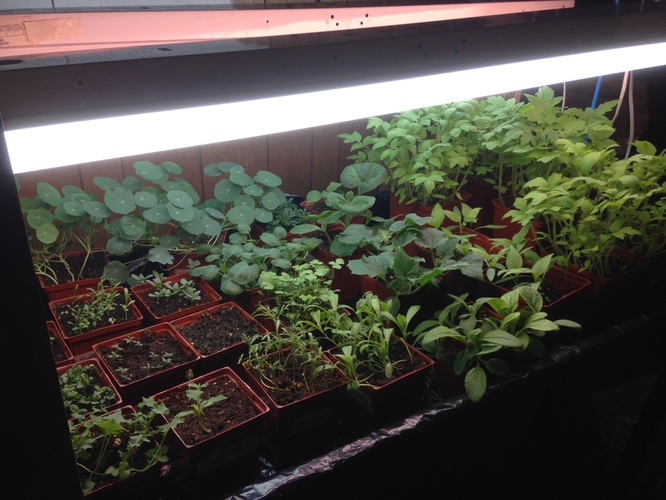 When we’re in the city, a few fluorescent tubes over a grow bed makes a pretty good starting place for our market garden crops, but the seedlings really need heat to get them germinating, not light. Once they break the soil surface, it’s then they need consistent light. If you’re off the grid, a few cinderblocks or bricks on top of your wood stove to create thermal mass works a treat for starting trays of seedlings without electricity. Once they’re up, transfer them to a cool, bright window (don’t fry them in the full sun right off the bat), and voila – off-grid starter plants.

I have a severe chemical allergy, which is one of the reasons we started the farm – so much so that Thomas calls me the canary in the coal mine. If something is sprayed or treated, I’ll welt up within minutes of touching or eating it (yeah, restaurants are all sorts of fun!). When we start plants or propagate cuttings, we try to steer away from chemical inputs – not just for me, but because we don’t want any of that stuff ending up in our garden. Here are a couple of easy tricks if you want to dodge the chemicals this spring!

1) Chamomile. If you’ve started seeds, you know that one of the worst problems they face is damping off. It’s a fungal issue and can be caused by any number of different fungi, but most often Pythium. When you plant small seeds into cold soil and water them continually, they become subject to damping off, and it can kill a tray of new starts faster than just about anything. Now, there are a few chemical drenches you can use, but if you want to dodge those, I highly recommend chamomile tea! We’ve used it for years now, and we just about never lose a seedling to damping off. To make it, simply grab a box of your favourite pure chamomile tea, brew three bags fairly strong, let the tea cool, and cut it with regular tap water. Water in your seedlings for a couple of days using the mix, then switch back to regular water. Works like a charm. I’ve also heard of folks using cinnamon – I haven’t tried it, but you might want to! I bet it smells great in the seeding room. 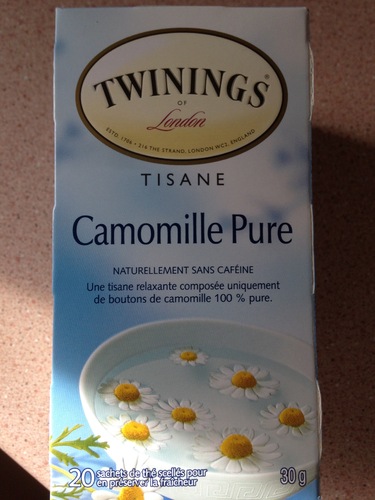 Any kind of chamomile tea will work a treat

2) Willow water. For those who are a little leery of using rooting hormone, willow water is quick and easy. Spring is the best time to make this natural rooting agent, when the new growth is out, but you can really make it all summer long. Willows contain two things, salicylic acid and indolebutyric acid, that help cuttings to root naturally and to fight off fungal infections that can take over cuttings rooted using other methods. It’s really easy to make: in the spring, cut off a handful of new growth (if you’re making willow water later in the season, use the fresh tips of the branches). Pull off the leaves and cut up the willow pieces into one-inch bits. Put them in a jar and fill the jar with water, then leave the concoction in the sun for three days to “brew.” Discard the willow bits, and you’re good to go. There are a ton of variations on this recipe, but they all come down to willow twigs + water + brewing time. Can’t go wrong.

One more thing I couldn’t do without to start our farm garden? It’s not a natural remedy, but it’s as vital to me as chamomile tea: our greenhouse! Anyone can make one. It doesn’t have to be fancy and it doesn’t have to be big. Ours is an ugly bug made out of a cheap Costco carport that we covered with clear tarps and built end pieces for. It’s homely as all get-out, but it raises a perfect crop of tomatoes, peppers, and herbs every summer in a climate where we often have night frosts as late as July. Since we built the greenhouse, I’ve never lost another crop of tomatoes. Bliss! 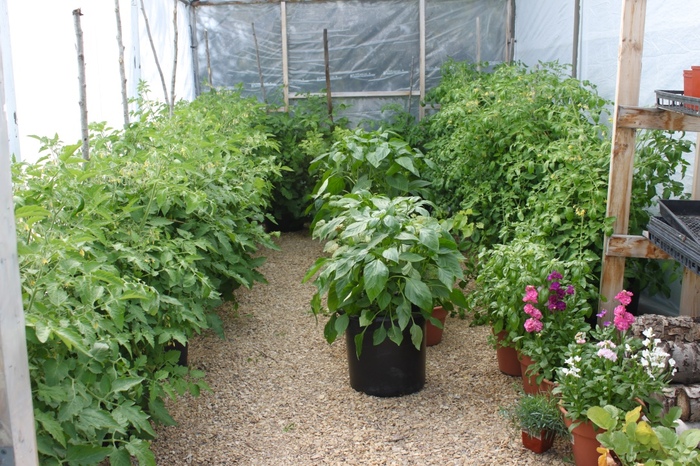 Homemade greenhouse on the farm

Happy growing, friends! We’ll be sharing more posts from the field over the coming weeks, and we’d love to hear about what you’re looking forward to this summer. Growing a new variety? Planting a garden for the first or the ninety-fifth time? Let’s share stories!