Learning From the Bees 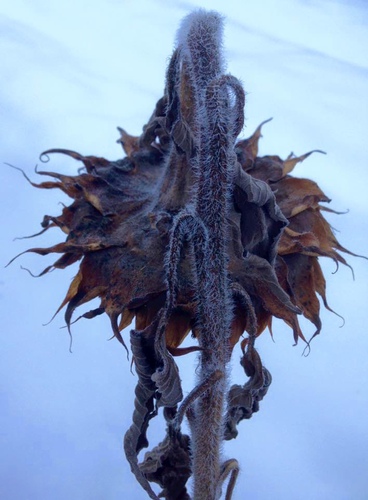 Silently on Christmas Eve,/ the turn of midnight’s key;/ all the garden locked in ice –/ a silver frieze –/ except the winter cluster of the bees.

We checked on the bees yesterday at the farm. It was a chilly -18C dusk, the market garden pegged down by thick hoarfrost, deep snow, and the close silence of a low cold ceiling. Outside the moose fence, tamarack smoke from the wood stove in our small cabin rose, hit the cold air, and snaked across the garden in cobwebs.

The hives were active, one moreso than the other, visible in a scattering of dead bees across the surface of the snow. My first response to the sight is always a sort of hitch in my heart, thinking of the summer bees and how accustomed they were to us, allowing us to tend the hives without fear or protection. But then I think, no, these are winter bees, harder and more focused, built to protect their queen and die doing so. There’s nothing of July’s languid evenings in these bees. They’re born and raised in the dark of the hive, and the long nights of deep winter are all they will know.

Wintering the hives makes me think of how we all go underground this time of year, particularly in the north where the days, though lengthening by scant minutes now, are still brief and dim. We’re called out of ourselves for the season of light that is December, drawn out of ourselves by the many holidays that fill the late part of the year with company and warmth and light, and then the aftermath comes, January and February, the darkest months of the year. We know the light has turned, but we can’t see any evidence of it yet.

The bees in the winter garden go deep. They pull their warmth around themselves and disappear into the middle of the hive, invoking the heat of August to keep the queen warm through those bitter months. We press our ears to the hives, crouched out there in the midwinter dark, and listen to summer in reserve. We’ve left sixty pounds of honey in each hive, richness stored by the summer bees, to get the colonies through the long winter. Out there in the market garden, the winter bees are eating honey from a summer they’ll never see, giving their lives in the darkness of the snowproofed hives to keep their queens from freezing.

I’ve been thinking about the Scandinavian concept of hygge lately, a bit akin to my husband’s Dutch gezelligheid, that untranslatable feeling of connection, warmth, wellbeing, and light. It’s difficult to put your finger on it, and cozy doesn’t do it justice, but you know it when you feel it. You walk into a place of hygge and sigh and feel at home, welcome. It’s here in our cabin, with the candles lit and tea on the boil, our two cats fluffed up on the windowsills, peering against the dusk. I wouldn’t say it’s out there in the dark of the hives, though. But there’s something in the bees that I want to learn from, an ownership of the dark that I appreciate. Midwinter here, I think, is all about learning to balance those moments of hygge, the pleasure of light and company, of holiday and busyness, with the strong survival of the dark. If we’re lucky, maybe we’ll learn to sit easy with ourselves and what we carry during those long months. After all, we’ve got the memories of summer to sustain us. Perhaps that can be enough.