Hallowe'en on the Farm

We’re a week away from Hallowe’en at Larch Grove, and the final tasks for the market garden are drawing to a close. The major crops have all been harvested, though some leeks, winter kale, and carrots under row covers linger in the garden for late autumn soups. The Huron wheat has dried and seasoned, ready to be winnowed and stored. The Bere barley and Vicar oats are already in.

We saw a big vee of tundra swans going over around noon and a late-season bald eagle making its way south. Nobody was hoofing it, so snow probably isn’t in the immediate forecast, but with November coming down upon us pretty quick, we’ve no doubt the deep cold is on its way. The market garden is still alive with red squirrels and chickadees, though; it’s reassuring to have their small presences nearby as we work.

Hallowe’en will bring the start of the truly dark months: at our farm, the sun won’t get up above the horizon until nearly 11:30 a.m. in the winter, and it’ll be down by 3:30. It’s time to bring out the fresh beeswax candles and use up some of the root crops in soups for the wood stove. We had a bumper crop of carving jacks and pie pumpkins, too, so as the days get darker outdoors, we’ll be firing up the oven for spice-filled pies and carving up a posse of jack-o’-lanterns to light up the farm road. Here’s wishing you and yours a bright night on Hallowe’en as the cold season comes on. 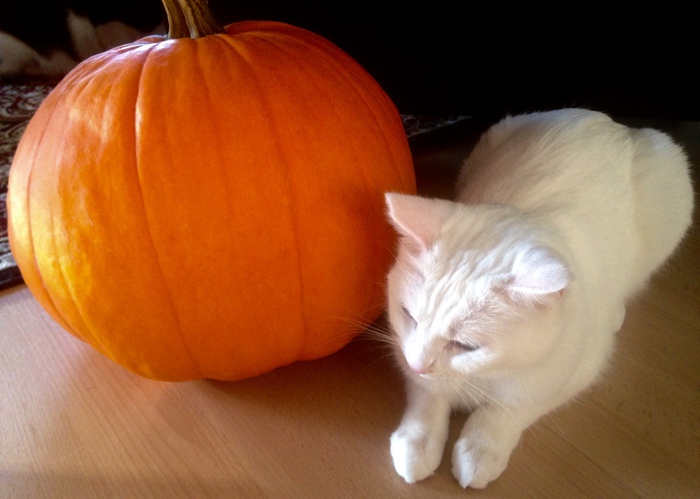 Chloe and one of the carving jacks