Building a Lake at the Farm

Howdy, gardening and farming friends! Hope you are well into your summers and the weather is being kind to you. We’ve been deluged with rain here in the north, and although the thunderstorms are a royal pain in the butt when it comes to trying to weed the market garden, the trees are loving all the moisture, so we take our lead from them! Wow, I bet the spruce have put on half a foot of new growth just in the past two months alone.

A young farming couple we met online just bought their first quarter in the next province over, and they’re chasing their own farm dreams – way to go! I was talking with one member of the couple a few days back over Messenger, and she was asking how we went about building our pond at the farm, as we had no water source on the land when we first moved there. That got me thinking! Why not write up a post about building a lake at the farm? In true experimental fashion, we’re not stopping at the trial pond. Our next step is to build a small fishing/swimming lake. But one thing at a time!

We began building the pond five years ago. At the time, we were working against the weather and a rather high water table, so the pond filled itself up pretty much right after we built it. Drat! We’d only been able to dig it three feet deep! And this is what it did during its second summer: 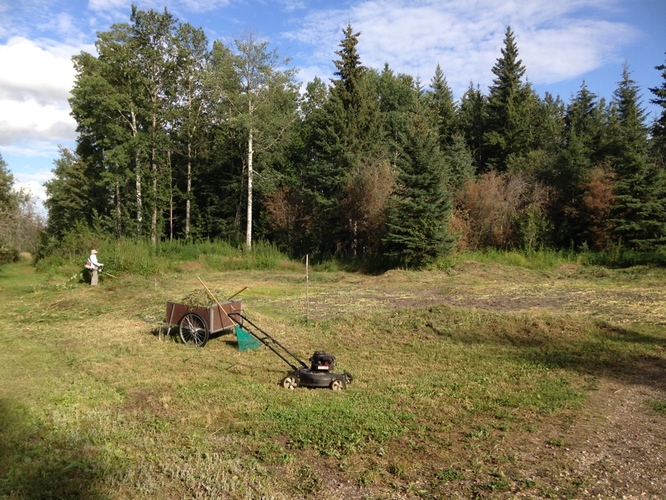 Yup – dangit! The pond dried right up. Thank goodness, the tadpoles grew up and evacuated the pond first.

So we got to work and built the thing right. In the photo above, you can see that the first task was strimming out the old pond, which had gone to grass and bulrushes.

Then the digger arrived: 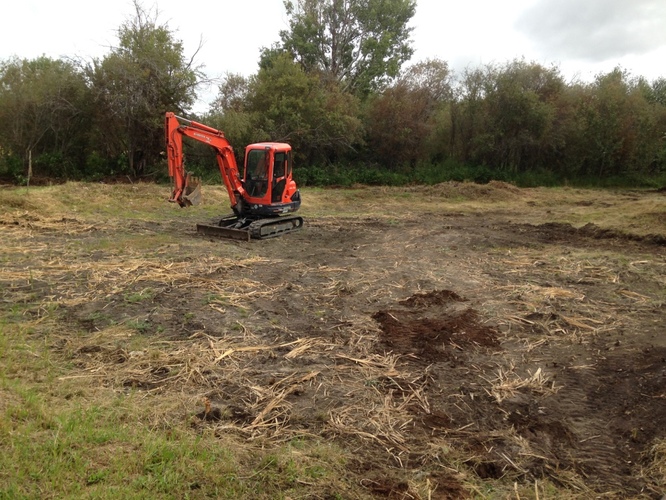 We had the small backhoe delivered, but we did the work ourselves. It was a good solid learning curve, but a great skill set to develop for the farm’s future. 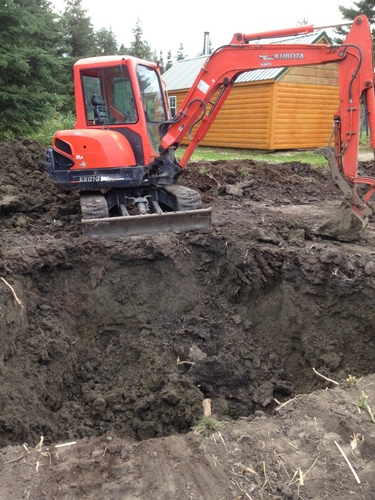 We had intended to dig the pond down deep into the clay (our farm has great deposits of slick clay underneath all that peaty soil), but the first attempt at the pond had filled up from the high water table before we’d been able to complete the digging. So we were working against the clock, knowing that the hole would soon start to fill with water… 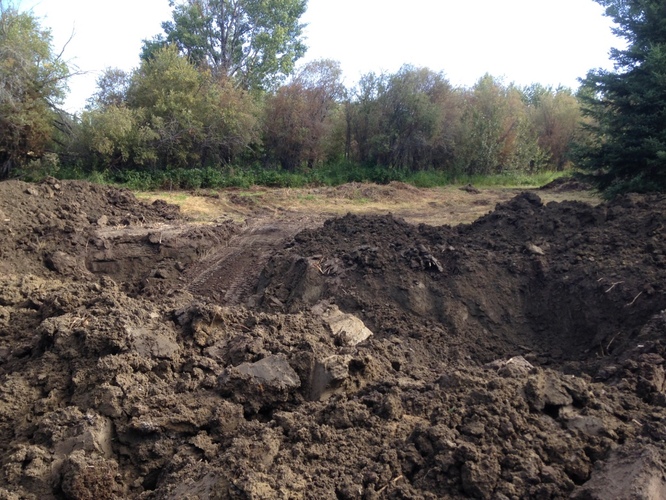 Once we set any remaining peat aside, the clay broke apart in huge, weighty slabs that challenged the digger. We switched up buckets to a larger claw and went at it, building a ramp into the pond as we went along. We knew our local wildlife would be visiting the pond, and that meant moose, and we wanted them to be able to enter and exit the pond for safe drinking without risking drowning their calves. 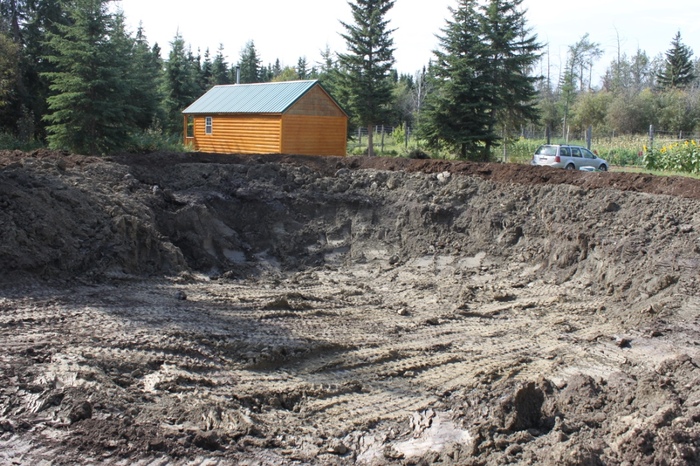 The sides of the pond were thick, thick clay, so we didn’t need to firm them down further. We used the backhoe to level the pond’s base and tamp it down well so that no cracks could cause the water to seep out. 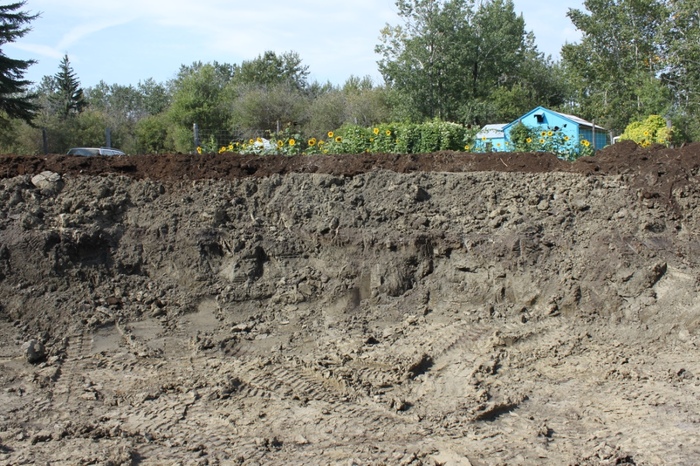 We bermed the peat around the rim of the pond to make a better planting surface for vegetation and clover. Here, you can clearly see the intended depth of the pond (we got there at last!). I took the photo looking up from the base of the pond, and I’m 5’2, so you can see the pond is easily 12’ in the middle. 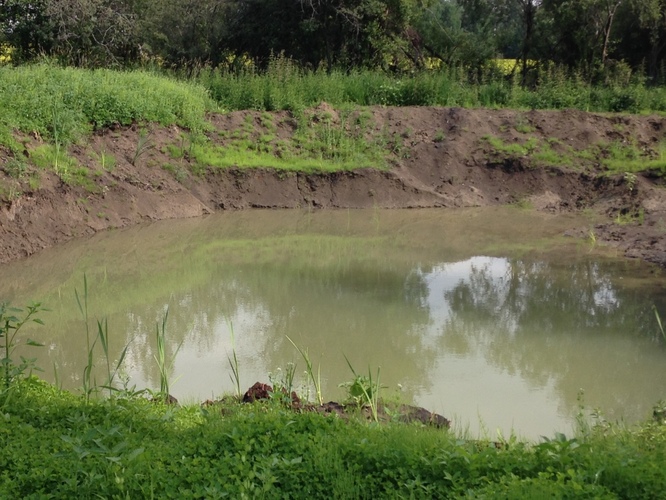 And here it is today. This summer has been incredibly rainy, and between that and the snowmelt, the pond has filled up like billy-o. It’s about eight feet deep in this photo. The banks have been sown to clover, but they still need a good weeding, and the planting steps on the inside of the pond’s banks could use some aquatic perennials. But it’s fantastic to see the water appearing like magic! The moose and deer adore the pond, along with pipers and ducks, frogs and toads. After we finish planting its banks, our next step is to harvest fieldstone from the front field to build a solar-pumped waterfall to aerate the pond for fish. By next summer, this will be a complete ecosystem and the water should have good clarity.

It’s been a lot of work, but I think we finally have a solid sense of the tasks required, the timeline, and exactly how much a pond contributes to our farm. Aside from a great resource for wildlife, it’s a space of beautiful calm, potential food, and fire control (a big thing up here in the boreal). Once we have this pond landscaped, we’ll be drawing up plans for the larger trout/swimming lake we hope to build as we put in our farmhouse. We’ll need the clay from that pond for foundation work and road base, and the benefit will be a beautiful swimming area after we’re done!

Gotta love the farm. It’s an incredible place to play.