We get asked this a lot.

Aren’t you afraid of losing touch with people when you’re out there, off the grid, so far from the city?

I’m talking to you right this minute, aren’t I? Technology makes amazing things possible for small farmers living off the grid. I can ping just enough signal off the cell tower a couple of quarters away to make a hot spot on my phone, and from that, I can link up my computer to write this blog post or check Facebook. I try not to be online too much, though, while I’m out at the farm. I want to be outdoors, watching the light and working with the bees, the woods, and the garden.

Doesn’t it scare you to be a woman out there, working on your own?

Nope. We’ve got good neighbours. I’ve got a cell phone if I need to use it. I know how to look after myself, and I don’t take any risks with my safety, like walking out alone at night during high cougar times of the year. I feel safer, in many regards, out at the farm than when I’m in the big city. Don’t get me wrong, I love the cities I’ve lived in, and they’ve had a lot to offer. (Great Thai food is hard to come by in small farming communities!) But where have I had garbage thrown at me from a moving vehicle and been blockaded from my car by a truckful of bold young men? Not out at the farm. Ironically, even though I farm in a small community where I stand out because of my background, I’m much more aware of being a woman of colour when I’m in the city.

Are you afraid of farm accidents?

Yep, as much as anyone else who works out on the land. There’s a lot that can go wrong. A chainsaw can jam, a tree can buck when you’re bringing it down, a rainstorm can kick up unexpected lightning. Some things are bound to happen: bites, scratches, cuts, bruises. That’s just part of the daily grind. But for the big stuff, we’ve got a good local hospital nearby, and a major set of medical facilities just under two hours from us in the big city. We are fortunate indeed, and very aware of it. I wrote about this same question in my book A Profession of Hope. The notion of being safe on the farm came fully into play when I had to go in for major surgery a few years ago and was told that I likely wouldn’t have made it if I’d been out at the farm at the time, instead of in the city. But I might have been travelling instead. We can’t know what’s in store for us or the best place to be at any given time. We don’t take risks at the farm around equipment or wildlife, and we make sure our tools are always in good shape. We keep a weather eye on our dispositions and health, trying to ensure we don’t get too tired or work to the point of making mistakes. Aside from that, it’s in someone else’s hands. We’ll always choose to live outdoors and be as safe as we can in the life that we love, rather than staying in the city just in case.

What if you fail?

What if we do.

Truly. The earth isn’t going to shake if something happens or the farm doesn’t work out as planned. Things go wrong all the time, and not just to farmers. All of us have known people whose lives have pinballed away from their anticipated path…or maybe we’ve experienced it ourselves.

Perhaps life is lived a little more on the edge, being out on the land. Climate change is real and visible and right in front of our faces every day. We can’t minutely control what’s happening to the earth around us any more than we can control the workings of our own hearts. And we can’t control the markets, which is something that can bring us down: Walking Away From Farming. But at the end of the day, anything worth throwing your heart into is worth risking failure for. If you love it enough, you might just fight longer and harder than most. That doesn’t mean you’ll make it.

But as long as there are sunsets like this one… 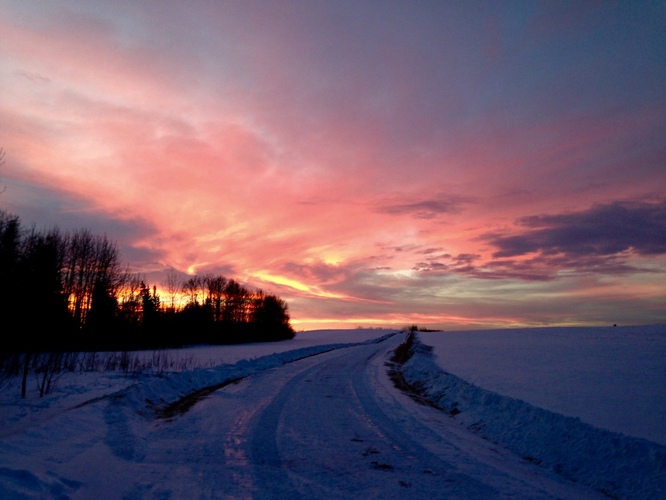 I’m willing to take the chance.