We started our small apiary at Larch Grove last spring with two hives, and the summer went so well that we decided to add two more this year, increasing the count by two hives each coming year until we reach ten. We’re planning to run a small local apiary where folks will know exactly which hive their honey comes from and where the bees have been harvesting in a given summer.

Our first two hives, Blue and Purple colonies (named handily for the colour of their supers, the boxes that make up the hives), seemed to settle in very well during their first summer at the farm. The colonies grew strong and large, and the hives rose into impressive stacks at the foot of the garden. 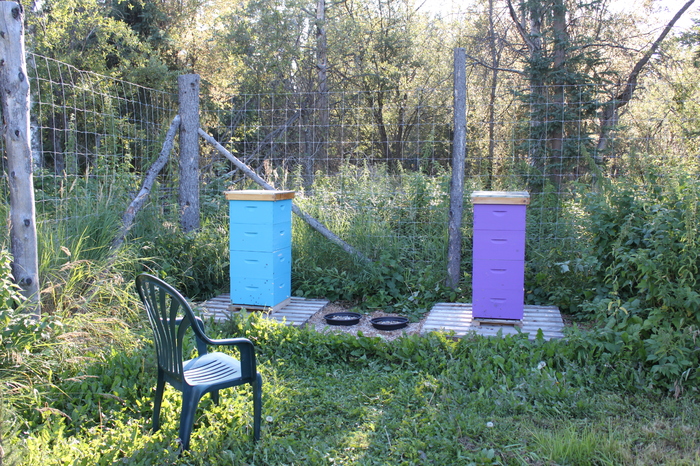 Experienced beekeepers often say that each colony has its own temperament, and they’re so right! Even just in the short while we’ve had our girls, we’ve noticed a definite mood in each colony. Blue hive is upbeat and busy all the time. I swear those bees would fly into the night if they could. They’re incredibly gentle, though, and they tolerate us even when we’ve broken the hive right open to inspect the lowest layers of brood. Purple hive has always been the quieter of the two, slower to get agitated, and also slower to get going in the morning. We suspected from the start that there wasn’t a strong queen in Purple hive because she took a lot longer to get laying, but by summer’s end, we thought she’d done okay.

Our first winter with the girls was a mild one, but cold isn’t the true enemy of bees. It’s the damp that kills them. We bundled the girls up into insulated coats and caps for their hives, and they seemed to be doing well. We’d listen at the hives in the depths of winter and hear the bees buzzing faintly, cozied up around their queens, moving through the honey stores. Blue colony seemed to be much more adept at this than Purple; there were days when we couldn’t hear our Purple girls at all. Only the small heat from the colony, framing the hive entrances with ice crystals, showed they were still alive. We worried and worried, but we couldn’t open the hives because the -20C cold would kill them instantly. They were on their own until the spring.

We knew something was up in the early spring with our Purple girls. Blue hive was thriving; when the days were warm enough to do our first inspections, we saw that they’d drained most of their 75 pounds of honey stores and had even begun opening up the extra frames of honey we’d popped in on a warm day in February: 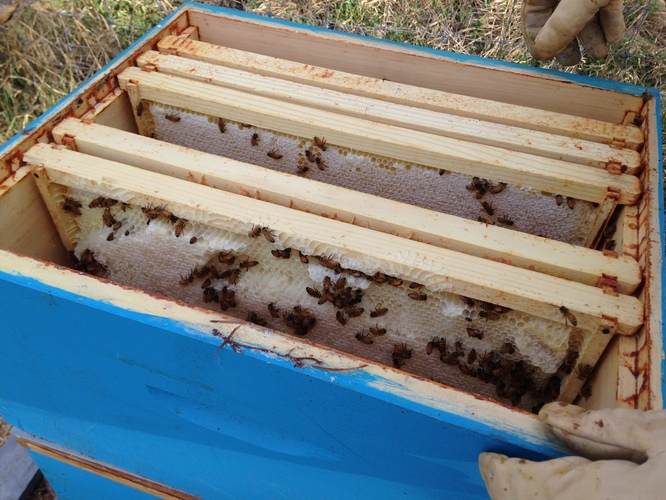 But Purple hive was in a bad state. Most of their honey was still there, untouched. We could see on a few frames where the bee ball had moved in the hive, huddled around the queen, draining honey cells to feed the group, but the traces were faint. The most damning sign of all was instantly clear: no new brood. Blue hive’s queen was laying prolifically, and the hive was setting in pollen and starting to put up honey. Purple hive was eerily empty. The bees bobbled around, looking lost. Not a single larva. Not a single egg.

Purple hive had lost its queen.

We’re pretty sure it was the late spring cold that did it, after a long (though relatively mild, for us) winter that only saw a few days hit the -30C mark. We suspect that her colony, a bit smaller and therefore a bit weaker, had a tougher time keeping the hive temperature at 35-37C and the entrances ice-free. That made it harder for the bee ball to move around and access warmed honey, and it also made it harder for the hive to stay well-ventilated. Somewhere along the way, damp and lower numbers working in tandem, the hive just wasn’t strong enough, and the queen didn’t make it. 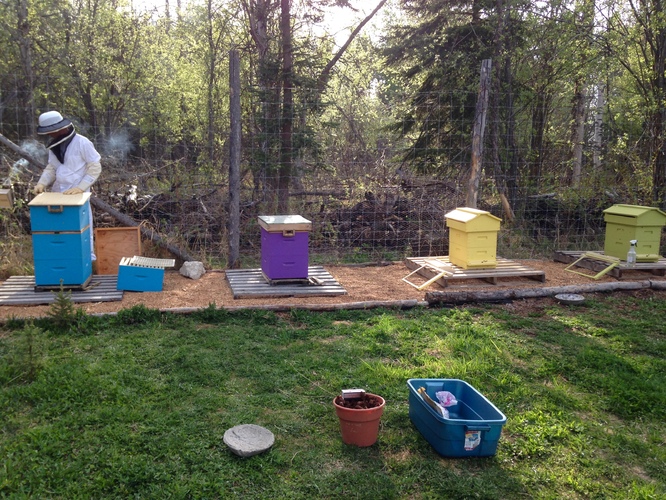 You can see from the photo above that Purple hive started the spring incredibly small. Even in the brood box, the bees numbered in the hundreds instead of in the thousands. There was a lot of empty space in the supers where there should have been bees.

There are a few things you can do with a queenless hive, we learned. If it’s a recent loss and the hive is in a decent state, you can purchase a new queen and release her into the hive after a couple of days, once the bees have gotten used to her scent. If there’s still brood from the old queen, the new bees will be hatching out and there should be enough bees to take up all the roles in the hive, from nursing to foraging, without being too disrupted by the introduction of the new queen. But if the hive is in a bad way, as Purple colony was early in the spring, with no new brood and all the bees aging out rapidly, it can be a good idea to divvy up the surviving bees amongst the other, stronger hives, as long as those introduced bees are healthy. Then, in the early summer, if you’ve got a colony that’s thriving (as our Blue hive is), you can do a split to keep the larger colony from swarming to look for more room. The split bees will raise up their own queen from the frames of brood you put into the new super, and because you’ll put in frames of pollen and honey, too, they’ll have food to get the new colony going.

This is the method we’re following with Purple hive. We’ve divvied up its remaining bees into the Blue, Yellow, and Green colonies, and in early summer, we’ll do a split mostly off Blue colony before they get too blocked up and want to swarm. Purple colony will be reestablished from some of our docile hard workers out of Blue.

Beekeeping has been an amazing journey so far. There’s been a lot of trial and error, a lot of great advice from a beekeeping friend, and our early immersion into the incredibly strong beekeeping community in our province. There’s also been some perplexity and heartache, not always knowing the best choice for our girls. But we talk to others, we read, we listen, and we learn…from the hives, too. The bees tell us a lot about what they need and what’s going on through their behaviour, temperaments, and energy.

For now, the apiary is down to three, but within a month, Purple colony will bounce back into being. And a good thing, too: this is the first year of our organic farm flower business, and the cutting garden is going to be some kind of heaven for those girls of ours when they get out foraging. Stay tuned for more photos as the flower gardens get going, and many more stories from the growing apiary at Larch Grove. 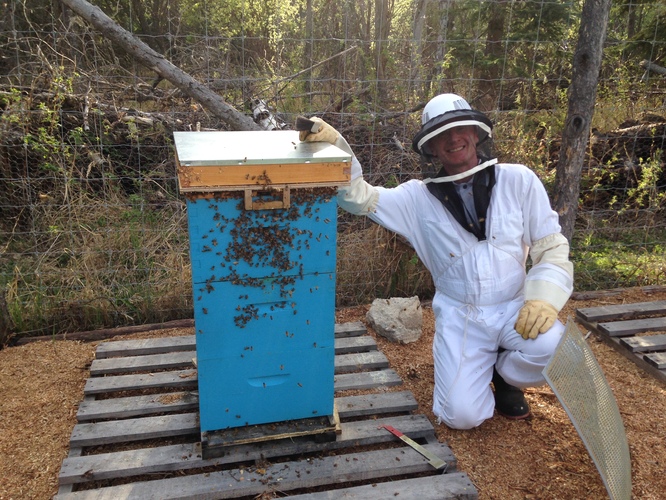