Deprecated: implode(): Passing glue string after array is deprecated. Swap the parameters in /home/customer/www/larchgrovefarm.com/public_html/perch/core/lib/PerchFactory.class.php on line 1043

Deprecated: implode(): Passing glue string after array is deprecated. Swap the parameters in /home/customer/www/larchgrovefarm.com/public_html/perch/core/lib/PerchFactory.class.php on line 1043

Deprecated: implode(): Passing glue string after array is deprecated. Swap the parameters in /home/customer/www/larchgrovefarm.com/public_html/perch/core/lib/PerchFactory.class.php on line 1076

After years of dreaming, 2015 was our Year of the Bees at the farm!

We’d wanted bees for a few years, and had read up about beekeeping and taken a foundational course at our local botanical garden, but every time we went to place an order for packages of bees, they’d been sold out. With hard winters and colonies suffering from increased levels of varroa mites and exposure to neonicotinoid pesticides on conventional crops, beekeepers were having to order more and more colonies to replace those that died over the cold months. We managed to get on a waiting list in 2014, and in the spring of 2015, we got the call to come and pick up our bees! 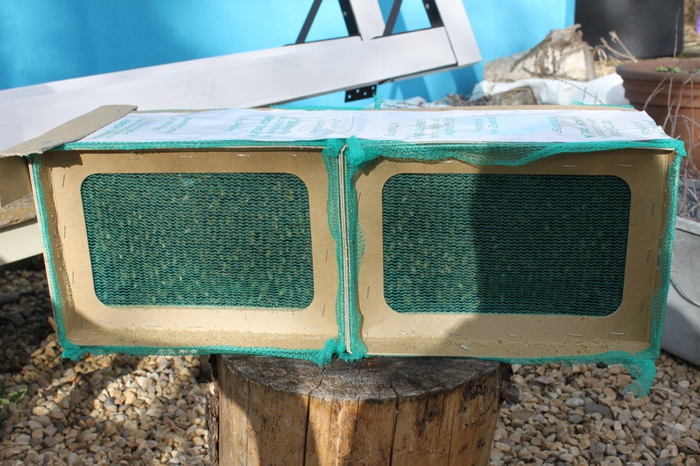 We had an interesting drive up to the farm that evening, what with a carful of beehives, two tiredly buzzing colonies in their cardboard shipping boxes, and our rather panicked cats!

We installed the bees in their freshly painted hives at the foot of the garden, in a spot that received the early sun and was protected from the worst wind. Basket willow and birch overhung the area, and the bees woke in their hives the next morning and headed out into the willow trees. From there, it was about a week before the dandelions bloomed, and the colonies picked up speed exponentially.

We decided on non-chemical beekeeping for two main reasons, and after many discussions with beekeepers online and in person. First, we’ve tried to keep the farm as organic as possible, following the organic certification guidelines for our province without being formally certified for financial reasons. Starting a chemically treated apiary defied our hopes of one day becoming certified organic.

Second, we knew our bees would fly up to five miles in search of nectar, and so we couldn’t guarantee they would produce organic honey — it just can’t be done in our area. But why expose them to more pesticides at home than the ones they already brought in by foraging? We continue to believe that pesticides weaken the colonies and make them more likely to die of mites and other ailments. So this spring, we determined we’d examine our bees weekly in the hive, treat them with powdered sugar to encourage grooming and mite drop, and go from there. We were starting out with two fresh colonies from New Zealand, known for clean bees, and they were living in the middle of a quarter section of forest, miles from any other honeybee colonies. We figured they had a shot. 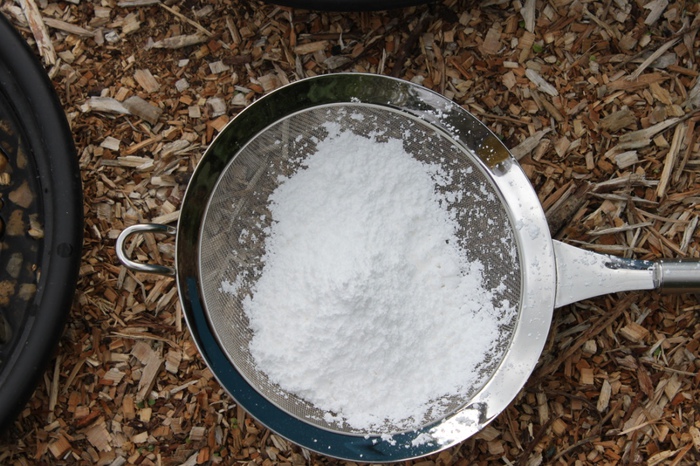 Yup, that’s just regular confectioner’s sugar. We opened up the hive and dusted the bees, frame by frame, attempting to get as many bees as we could. We returned to the hive several times over the space of an hour to dust the bees entering and leaving. The sugar induces grooming, and that helps in mite drop. The bugs fall through the hive and onto the bottom board, and they die there, unable to reattach to the bees. 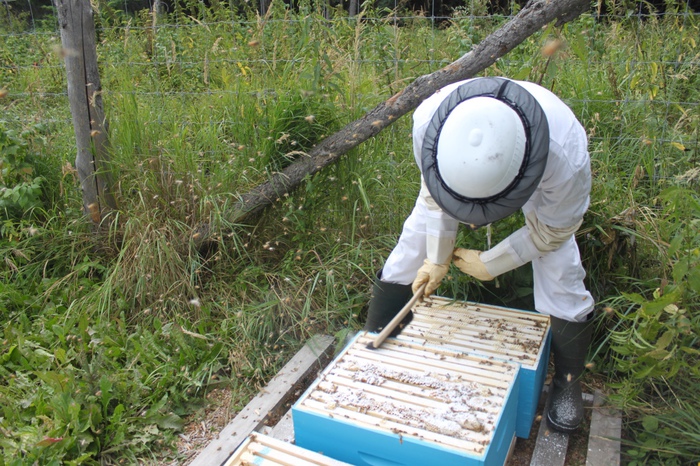 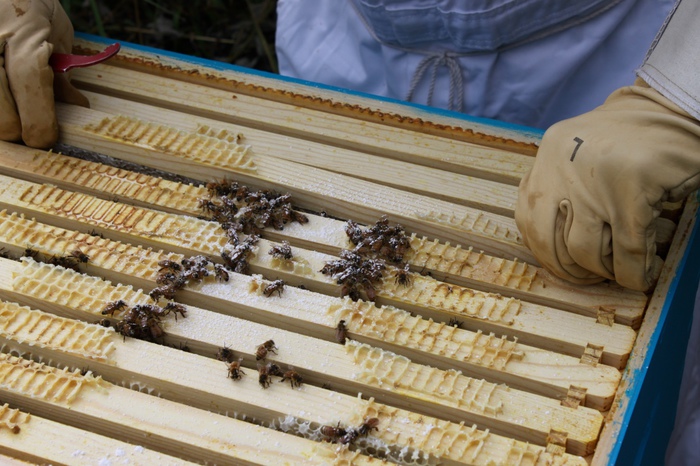 Sugaring the Bees Frame by Frame

After sugaring the bees thoroughly (they’re creating winter brood now, so we want the new brood to hatch into as mite-free a hive as possible), we removed the extra honey supers, leaving the bees with a full honey super per hive to help them get through the winter. The brood chambers are beginning to empty as the summer bees die out and the winter brood is born; we could very definitely feel the energy of the two hives shifting. 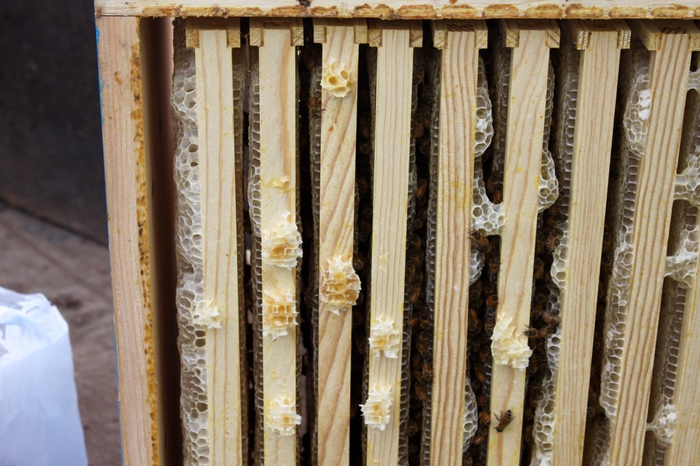 We left the honey supers at the end of the garden, after dusting the bees in there with sugar, so they could exit the supers and return to their hives.

Once the supers were clear of bees (or pretty much, anyway), we took the supers and squirrelled them away in the grain silo for processing. Our first honey from the farm! We’ll send off a sample for testing to see what the pollen count is, determining what sort of honey our bees have made. But more than that, we’re hugely excited at how well the colonies have settled in, and we’re excited for Year Two of our bees in the spring. 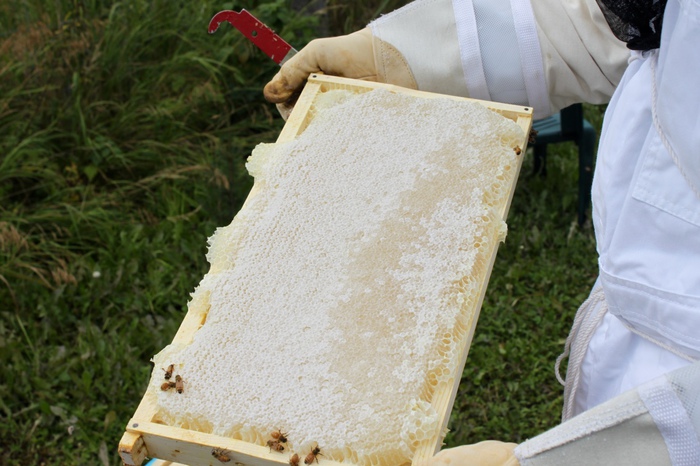