At the start of Larch Grove Farm back in 2006, when we were clearing the first acre of dead brush on the corner of the property and beginning to stay out at the land overnight, we lived for about four months each year in an unheated, unwinterized 14 X 6’ truck camper. It was a gift from a family friend, and though from the 1970s, it was in pretty good shape. For the first four years on the farm, it suited us well while we were working the land and saving everything we could to put toward our cabin.

But time (and eventually a big lightning-struck tree that came down on the market garden fence and the camper roof) took a toll, and the camper became kind of an eyesore. We knew it was time to tear it down and recycle what we could, but it would mean a heck of a lot of work. Plus, what would we put up in its place? 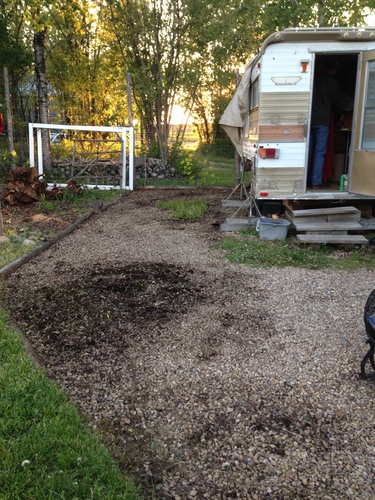 The camper, no longer used, during the early summer of 2015. The patio, too, needed rebuilding; you can see where the cardboard weed barrier has broken down and all the dandelions have come through the gravel. But there’s a camper to move first!

Well, once we decided to revamp the area at the front of the market garden, the camper came down in a few days’ time with a sledgehammer. In the meantime, several tons of road crush gravel were delivered, and we hauled up the riverstone patio to rebuild it all by hand (this time, with landscape fabric down first to stop the weeds from coming through!). Maybe it’s a little fussy, but the sheds are the entry point to our market garden, so they see a lot of visitors in any given year. 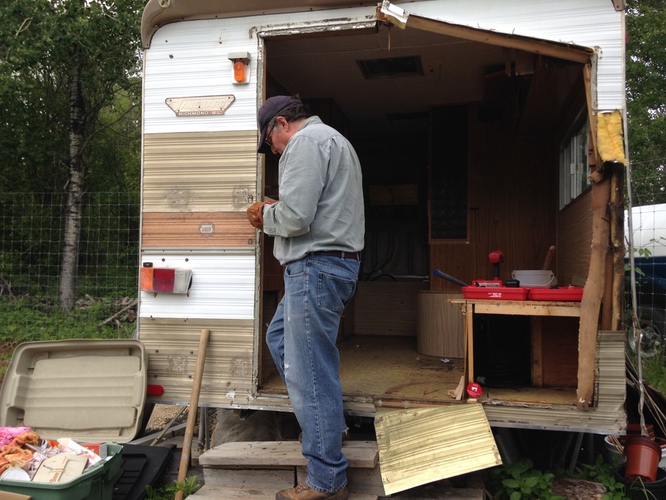 Jenna’s dad, having rather a lot of fun taking down the old camper…

We salvaged what we could from the camper, including our fridge and stove, and hauled the rest away. The rebuild of the patio began with hand weeding, then fabric-laying, then the road crush for a topping, brought in in the Vermont yard cart. This took about a week. Good for the arm muscles, though! 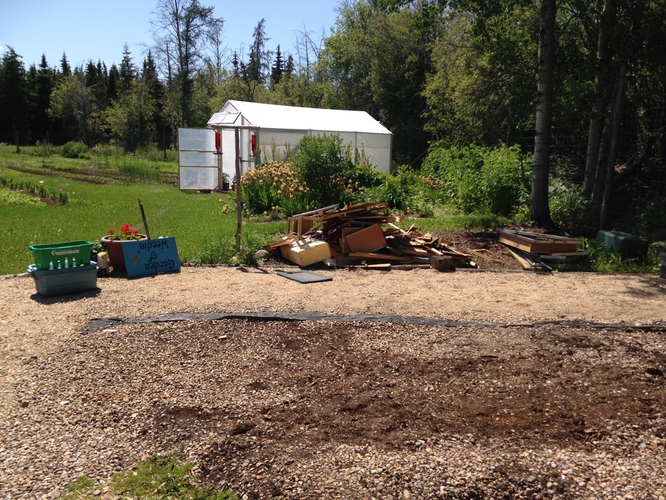 We started with a good strong base of treated wood (alas, yes, but we want this shed to last!). That included a hefty load of rodent wire to keep all the mice out. 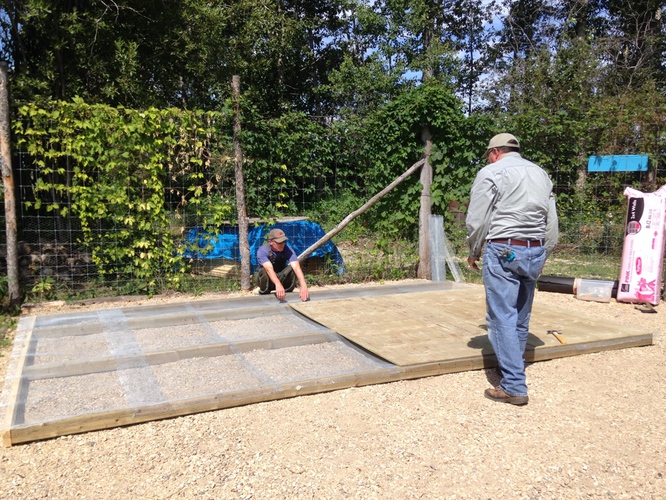 The walls went up pretty quickly, strong pine panels with a tarpaper wrap and pink insulation against the winter weather. This is one heavy-duty shed! 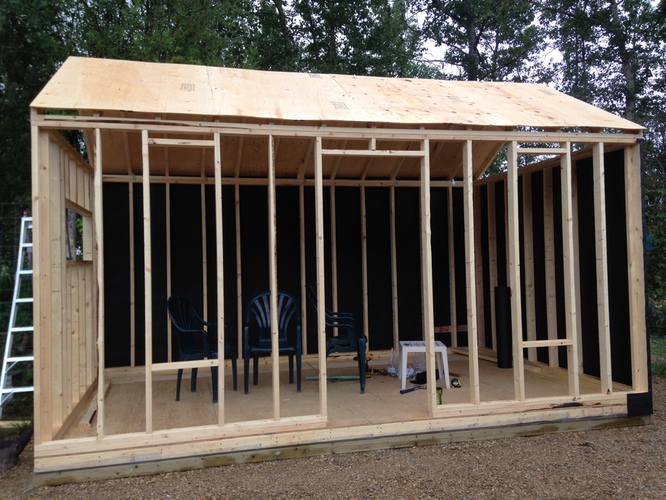 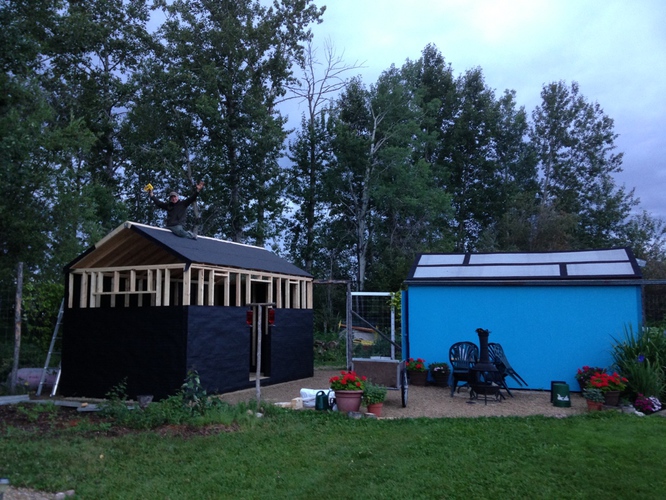 Who’s the nut job on the roof with the staple gun?!

One of the major mistakes we made (as we later learned) was being thrifty with the windows. We wanted to save money instead of buying off sales from a clearing house, and one of our neighbours had gifted us several panes from her old bay window. We knocked the panes apart to use them separately…and the old seals broke. We now have several windows that fog right up at the first sign of hot weather. Gonna have to replace those with custom windows (argh!) in the spring. That’s the reason the windows in this shed look so, um, eclectic from a distance. 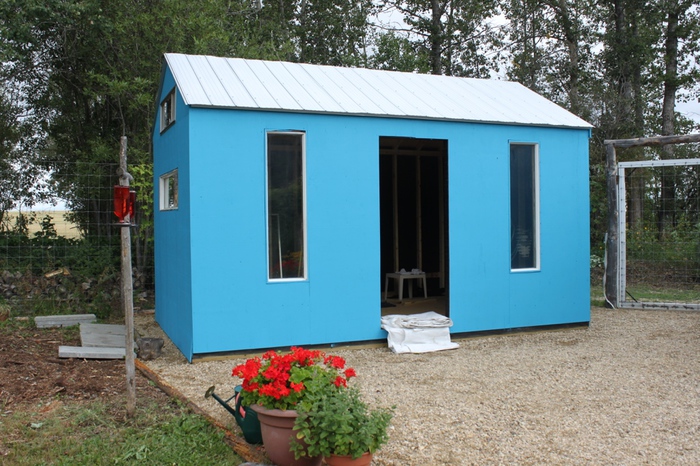 And here’s the nearly finished cookshed with its twin, the old tool shed (formerly a flour bin from town). 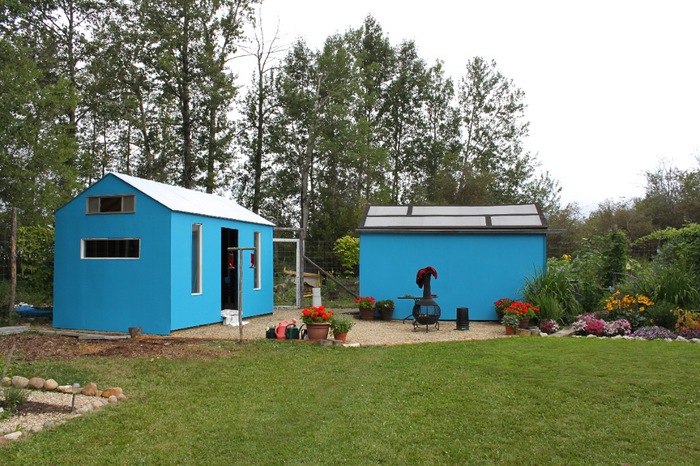 There’s still a lot to go: in the spring, the windows will need replacing. We also have to finish the eavestroughs for new rain barrels, plus the interior (the ply got filled and sanded, but only one coat of paint made it onto the walls before the first frost). Spring will see the interior finished and kitted out for preserving. It’ll be great to make jams and jellies right in the garden without having to fire up the stove indoors and roast ourselves in the high heat of summer. And then it’ll be time to plant up the area around the shed: what with the big gravel patio holding in so much of the sun’s heat, we’re picturing several trellises of hardy grapes up against these beautiful blue walls.

We’ve got a few months’ respite now, as the market garden is buried under a couple of feet of snow, but we’ll post further pics in the spring so that you can see the cookshed in its fully finished state…grapes and all!